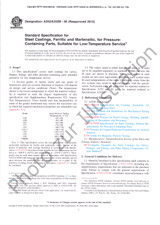 This standard includes those statistical items related to the area of design of experiments for which standard definitions appear desirable. It provides definitions, descriptions, discussion, and comparison of terms. This standard also provides the table of contrast coefficient and table of contrast analysis. The table of contrast coefficient implies that once the contrast coefficients of the main effects (X1, X2, X3 and X4) are filled in, the coefficients for all interaction and other second or higher order effects can be derived as products (Xij = Xi Xi) of the appropriate terms. The table on contrast analysis indicates the measure of experimental error, s, that can be obtained in various ways. If the experiment is replicated, s is the square root of the pooled variances of the pairs for each treatment combination. If some effects were felt to be pseudo-replicates, multiplying the contrast by the regression coefficient of these terms forms a sum of squares (as in analysis of variance) and these would be summed and divided by the number of terms involved to give s².